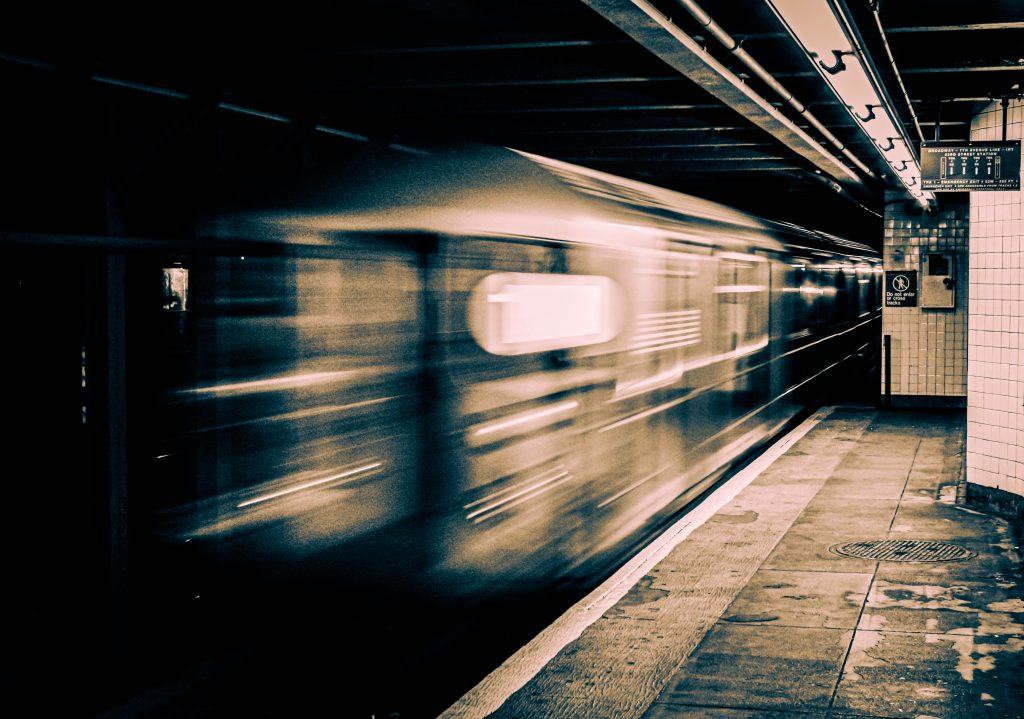 In the NYC subway, there is a ramp that is absolutely not for wheelchairs, where each step feels like falling. “The knack lies in learning how to throw yourself at the ground and miss,” as Douglas Adams said of flying. Laying tracks before the train, that headlong euphoric rush to complete each show and onto the next. No time, no time even for Opening; the hurried goodbyes and onto the flight; dusty angles on fresh movement over old words, Gotta Go. Memories placed in a tin lined with schedule and soft clay, no room for unstructured thought, Rapid Eyes Open Movement. No time, no time.

And then The Lurch. Followed by silence.

I did not remember two birds zooming inches past me through the courtyard of the Boston Public Library, becoming a caduceus in the air, briefly. They lived there, the birds, feasting on café crumbs, nesting three stories above the fountain, their wings aflutter in the silence and, for reasons not entirely clear, I imagined the post-grad hunched over her Vonnegut was wondering about spaceships, about why we are obsessing when the earth is already a giant vessel rocketing at inconceivable speed towards itself.

But when the world at last crashed inwards on March 12th, the shuddering stop sent all the books flying off the shelves. The stained glass cracked, pages erupted in vast plumes across eerie Turner landscapes.

The next day, Times Square lay fallow and still I did not remember childhood weekends at my mother’s cabin in New Hampshire, nor the green canoe (faded like her jeans). Arcs in the water as we paddled out, dappled gold falling as her hand lifted from the lake. The beach, the rock, the buoy, the house itself. One vast room with walls between: a living room past the fireplace curving into kitchen, spiraling upward to a bedroom with the sky-wide skylight that I did not recall staring through for hours; past the leaves and pine cones, up and up and up.

But on day three, I began to think of the poem that came to mind when Akayed Ullah’s pipe bomb (constructed of christmas lights) did not quite detonate in the tunnel we shared with the Port Authority. I hate to make it about me, I know it was something he was working through himself, but as I rushed up the stairs each step was his touch taken in, the rise and return of Brian Turner’s “2000 Lbs,” the sound the heart makes quick in the panic’s rush, the surge of blood searching for light and color. The searching text I sent right then to a woman who might have been in the crowd, whom I had not seen in 15 months but who had brought me close to a panic rush: “Are you okay? Were you there with me?”

Tobias Wolff described a bullet’s time-lapse journey through a man’s brain; all the things he did and did not remember during its glacial trajectory. We are living that bullet now. It is traveling, working through us like the G train.

Some time after the world splintered and the mannequins tipped and the tides pooled, when the silence at last became heavier than air and sank to earth, here is what I remembered: the smell. Of theatre seats, wood worn soft under coiled rope. Of pages in decay and the quiet, cavernous blank page that we once rewrote together. I am standing in that echo, on the deck, rain pattering against metal overhead. The rigging’s rustle and genie’s sway feel universal, as music is tinkered with softly in the wings. The next lamp warms on and my hand lifts to cover it with a small rectangle of blue glass (pulled from a welder’s mask). I peer through the filter, speak to the man behind the light, centering the filament between my eyes. It is a hard day; depression and I having struck an uneasy truce. On the second of two breaks, I join my gathering shadows outside to watch the sun set.

It’s a good time of year, at least: the still spinning planet has put Sol in my sights, drifting down the brick walls which squeeze the loading dock and dumpster. The smell is not ideal out here, but the air is crisp so I wait to see the disk I had been honoring inside merge with the true horizon. The slicing light scatters rain in roiling waves.

Shuffling comes from the dumpster to my right. A shape emerges from the lid and stretches. A small calico kitten, smudged nose and bent whiskers, looks up at me. More mews and out they pour, and in awe I count fifteen cats of all colors.

There is a still moment. Then they are gone down the alley.

Back on deck, welding glass in hand, I am told the students of a nearby school bring kittens to the dormitories, and throw them out when caught. Now, at dusk, clowders of cats wander downtown. The storm continues battering the tin roof far above and, sometime in June of 2020, at last I hold the raindrops on my tongue.

Stillness cannot speed the bullet. Time will take itself. But, when the world again spins and nothing is back to normal, I intend to repose with the train as it takes a moment’s rest in the tunnel. And on a steady incline, place one foot after the other in measured step.

All photos by Christopher Annas-Lee.

Christopher Annas-Lee is a lighting / projections designer, photographer, and very occasional writer, based in NYC. His previous work with Luis Salgado includes The Tempest (R.Evolución Latina) and In The Heights (GALA Hispanic Theatre), for which he won his second Helen Hayes Award and both the 2017 Broadway World Award and their 2020 Award for Best Lighting Design of the Decade (DC, Non-Equity). Christopher holds a BFA in Lighting Design from North Carolina School of the Arts, and was the 2014 Lighting Fellow at the J.F. Kennedy Center (Kenan Fellowship) and the 2017 Princess Grace Design Fellow (Fabergé Theater Award). His portfolio is available at www.annaslee.com.